During the past year we have been intensely committed to developing and implementing an on-line application process. This past application cycle was very successful with over 86% of the applications processed since May being input by the applicants themselves. We are excited about the potential that this system has for interfacing with our in-house data base and for providing current timely information to our customers. As this system continues to develop, from time to time we will be providing updates to help you understand and be comfortable with using the web site and the application system. In that spirit, we would like to brief you on how we assign years to applications as it may seem a little counter intuitive to those of you applying between October and January. 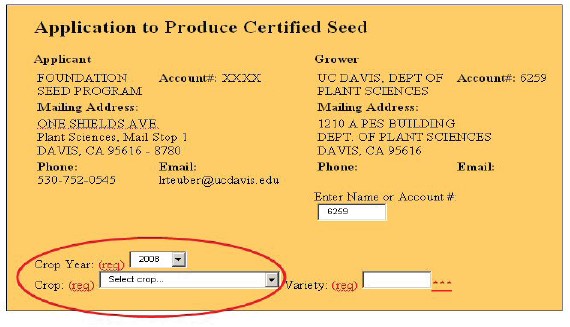 When you start your application you will see a page that looks like this:

The Crop Year indicated will be the year in which the CROP WILL BE HARVESTED. There are two reasons for this. First, this is linked to the Certification Number that will eventually be issued. Second, our annual reporting is based on the year in which the seed is harvested. Applications made between October 1 and December 31 will be assigned to the crop year corresponding to the next calendar year (e.g. an application for wheat submitted on November 1, 2007 will be assigned to crop year of 2008).

The name by which a variety is first marketed is unchangeable and it should be the only name under which the variety is marketed in a country. While each country has its own laws, the general principle is there can be only one name for that variety in a country. It would be misleading, for example, for two companies to market the same variety under different names. In the United States, the Federal Seed Act clearly states in §201.34 that a variety must bear the “first name” under which it is introduced to the public market. A single unique synonym may be used when marketing a variety in another country. A link to the entire Federal Seed Act is available at http://www.ams.usda.gov/lsg/seed/seed_pub.htm.

The Certification Technical Committee is advisory to CCIA regarding eligibility of varieties for certification. This committee reviews varieties for distinctiveness and genetic stability according to the guidelines established by the AOSCA. The CTC meets three times a year, in January, April, and August, to review pending varieties for which an ‘Application for Variety Certification’ has been submitted. See the CCIA website for further details.

UC Davis has formed the Chancellor’s Laureates giving society recognizing donors who have given more than $1 million to the university. The CCIA members were recently recognized as one of these leadership donors. Each year, on your behalf, the CCIA collects research funds for various crops (alfalfa, cotton, grains) and distributes the funds to researchers in a competitive grant process. The CCIA was represented at the dinner and presentation by Past President, Chuck Schonauer and Executive Director, Larry R. Teuber.

During the May 17, 2007 the CCIA Board of Directors Meeting, the Board approved five scholarships to be given at the major Agriculture Universities in California. The awards will be awarded to students with an active interest and participation in the seed industry, crop improvement, crop science clubs, seed packaging, seed and plant judging contests and/or activities related to seed production.

A $1500 scholarship will be available at each of the following colleges/departments:

Each university sets their own due dates and application specifics. For more information please contact the College or Department of each school or Robert Stewart at the CCIA, 530-752-9826 (rfstewart@ucdavis.edu).

It is our pleasure to introduce our newest staff member, Alex Mkandawire. He was born and raised in Malawi, a country about the size of the state of Pennsylvania, located in the south-eastern part of Africa. Alex obtained his B.S. in Agricultural Science from University of Malawi’s Bunda College of Agriculture. He obtained an M.S. in Crop Physiology and Production in 1984 from Iowa State University in Ames, IA and a doctorate degree in Crop and Soil Science from Michigan State University (MSU) in East Lansing, MI. Upon graduation from MSU in 1987 he returned to his native Malawi where he taught and conducted research on various crops at University of Malawi. He returned to the U.S. in 1999 to work on a UC Davis/Malawi collaborative bean research project for four years. Thereafter he worked at Syngenta Seeds, Inc. in Woodland CA. Alex enjoys working at CCIA because of the wide range of crops that we handle. He is also looking forward to spending a lot of time in the fields getting acquainted with these crops and their role in California agriculture. Alex is from a family of three sisters and three brothers. He and his wife Sheila have two daughters and two sons. His daughters just graduated at California State University, Sacramento. One son is currently a Junior at UC Santa Cruz and the younger son is a Junior at Davis Senior High School. His sons love to play soccer and have both played for the Varsity soccer team at Davis Senior High. His wife is a nurse at Sierra Health Care, a convalescent hospital in Davis. Alex and his family are members of the Davis Community Church (DCC), a Presbyterian church. His native Malawi has a strong Presbyterian following since the turn of the 19th century when the faith was introduced by Scottish missionaries, particularly David Livingstone and his associates.