Robert (Bob) Ball passed away peacefully in his sleep on Monday, March 4, 2013. He was born on April 24, 1930, in Sacramento to Walter and Mary Ball. He attended McClatchy High School in Sacramento, received an AA degree from Sacramento Junior College, and a BS degree in agronomy at UC Davis. In 1951, he served in the U.S. Air Force in French Morocco. He married Joan Pesavento in 1953 and they settled in Davis, where they raised six children together. Bob was well known locally, nationally and even internationally for his work on seed certification and agriculture. He served the University of California since 1956 where he began as a staff research associate. He ultimately became the manager of the California Crop Improvement Association (CCIA) and assistant director of Foundation Seed and Plant Materials Service. As manager of CCIA, he worked with seedsmen, seed dealers, agricultural commissioners and county farm advisers. He was often called upon to train and give talks to university groups and seed technologists, and he was a guest lecturer to students in vegetable crops and agronomy. Bob played a major role in developing plans for the construction of a much‐needed new Seed Research Center at UC Davis; the building represented one of the few examples of cooperation between the private sector and the university. Bob was the recipient of the Distinguished Achievement Award from the university in 1985; he was recognized for his extraordinary service to the university and to the public. He also served on many committees in the community, including the East Davis Fire District and the Willowbank Club. Bob was preceded in death by his wife (Joan), by his parents, and by his brother, Jim Ball. He is survived by his sister Patty Smith, his children Jan (Dave), Lorrie (Steve), Dan (Paula), Mary Ann (Jeff), Katie (John) and Bill (Stacey), and 11 grandchildren.

Director elections were held in April for the even‐numbered districts. Each elected director will serve for 4 years. We appreciate all the CCIA members who took the time to vote. Results of the election:
District 2 ‐ new Director Mary Wadsworth
District 4 ‐ re‐elected Tom Hearne
District 6 ‐ re‐elected Jack De Wit
District 8 ‐ re‐elected Glenn Hawes
Mary Wadsworth has been on the board for 7 years as a Board appointed At‐Large Director. Since she is now representing District 2, John Palmer (Cal/West Seeds) has been appointed to fill in as At‐Large Director for one year. A director to sit as the full 4‐year appointment will be selected at the May 2014 board meeting. 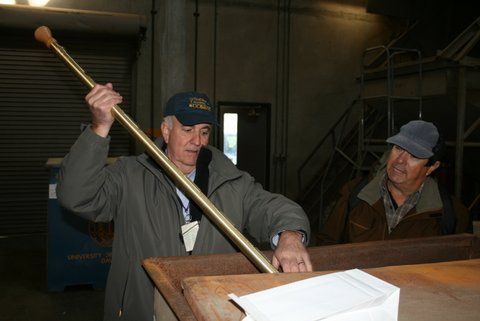 The CCIA, in cooperation with the Association of American Seed Control Officials (AASCO) have developed a Seed Sampler Accreditation Program to provide training for seed samplers to assure uniform sampling procedures recognized by state, federal and international agencies/organizations. CCIA director John Heaton, CDFA, has worked closely with CCIA field inspector Alex Mkandawire to develop the curriculum of the program.

The Federal Seed Act and State Seed Laws regulate the seed market by ensuring that seed vendors offer seed that is in compliance with standards for sale. Compliance with these laws is determined via truth in labeling with information from a Laboratory Report of Seed Analysis that is submitted by the laboratory after it completes a seed test done under AOSA’s oversight. This test and the resulting analysis is performed on a sample of seed that represents a large seed lot. Obtaining a representative seed sample of a size suitable for the appropriate tests connects the seed sample test in the laboratory with the seed lot for reliable labeling.

The objective of the Seed Sampler Certification Program is to promote the use of acceptable sampling procedures
to improve seed lot quality estimation for appropriate labeling and to enhance uniformity and consistency of
seed sampling. In the past few months, the program has accredited almost 100 samplers in 4 different geographic
areas of California

Teuber Appointed to PVP Board

Dr. Larry R. Teuber, Executive Director of the California Crop Improvement Association and Professor of Plant Breeding at the University of California, Davis, has been appointed by USDA Secretary of Agriculture Tom Vilsack to serve on the Plant Variety Protection Board. The 14‐member Board is comprised of experts in various areas of plant varietal development. Members are appointed by the US Secretary of Agriculture and include seed industry, public sector, and farmer representatives. The USDA’s Agricultural Marketing Service administers the Plant Variety Protection Act, which provides legal protection in the form of intellectual property rights to developers of new and distinct plant varieties, ranging from farm crops to flowers. Larry’s background includes a wide range of academic and seed industry accomplishments, most notably in research dealing with alfalfa and other forage species, that make him uniquely qualified to advise USDA on mailers dealing with protecting new varieties and the plant breeders who develop them. CCIA Director Kent Bradford is leaving the PVP Board after serving for several years. Congratulations to Larry on his recent appointment.

The CCIA will only accept laboratory Reports of Analysis, to determine approval for seed certification, that are based on one single seed sample. Purity analysis and germination must be conducted on the same seed sample and be presented in a single report. "Merged reports" which contain analysis from different seed samples will not be accepted. The CCIA will accept Reports of Analysis dating up to a maximum of six months from the date of the test to the request for seed certification in order to issue a Seed Inspection Report. The certification number is required on all reports of analysis. If the Report of Analysis is missing any of the required information the conditioner will be responsible for obtaining a new report from the seed laboratory. You can be certain to provide the seed laboratory with all required information if you print the Sample Form from your files at the CCIA web site. Call the CCIA office if you need assistance in finding your sample forms.

At this meeting, AOSCA considered and adopted a recommendation from the Alfalfa/Small Forage Legumes Committee for the ‘Regression Method of Determining Fall Dormancy in Alfalfa’ as proposed by the Western Region and as adopted by the North American Alfalfa Improvement Conference (NAAIC). This method is more accurate than the one currently used.

AOSCA also considered and adopted a recommendation from the Small Grain/Rice Committee to remove variety acceptance criteria, e.g. yield, disease and pest resistance, and quality from the applications. However, any claims of advantages to these should continue to be substantiated. A committee was also elected to review all criteria that are required in order to accept varieties while keeping in line with relevance and the Federal Seed Act. AOSCA also noted that hybrid wheat varieties may be coming into certification but current standards do not apply for their production. A committee of stakeholders was also elected to develop standards for hybrid wheat.

The Business Committee of AOSCA noted the successful development and launching of the ‘Organic Seed Finder’ by AOSCA. They recommended that in tandem with this development, AOSCA should develop a ‘Certified Seed Finder’ that would assist growers and other clients to locate certified planting seed stocks.

The Foundation Seed Stocks Committee discussed the need for collaboration between public and private wheat breeding and multiplication activities particularly for the future. They also discussed how they could obtain more revenues through contract production, loyalties, licensing, etc., which would be necessary to continue to run their programs. Also discussed was parent seed production after expiry of patents, the Roundup Ready patents for soybeans being the case in point.

The Educational Promotions Committee informed AOSCA that the Committee would be undertaking a survey to determine the different actions that need to be taken in the process of accepting a variety into certification in various states. Similarly, they will be documenting the procedures that are required in order to have technologies processed for acceptance and approval.

Applicants are reminded to notify growers regarding any pertinent harvesting instructions that are provided on the Field Inspection Reports. Sometimes portions of fields have been noted as "not to be harvested" because it has not met certification standards. The growers need to have this information prior to harvest. Harvesting of certified seed is subject to supervision of the local county Agricultural Commissioner, whose office MUST be notified prior to the harvest of certified seed (California Agricultural Code, Division 18, Chapter 2, California Seed Law, Article 7, Section 52421(b)). All harvesting equipment and any conveyances used to handle the certified seed must be cleaned and verified by the county Agricultural Commissioner prior to harvest or use. The cleaning of harvesting equipment is the joint responsibility of the applicant and/or grower.