All members are invited to attend the membership meeting on May 22, 2008 at 9:00 am in the Prato Room of the Parsons Seed Certification Center building on the UC Davis campus. Please contact Kitty Schlosser at 530-752-0544 or meschlosser@ucdavis.edu if you plan to attend so we can make sure there are seats available for all attending. There is no registration fee; travel and lodging expenses are the responsibility of the member.

Late fees are assessed when applications are submitted past the due date. Check the table below for due dates of specific crops: 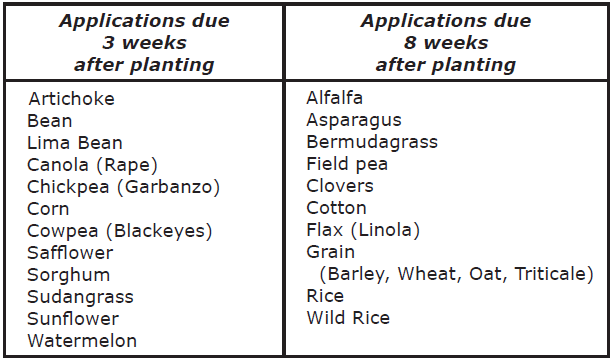 This year scholarships were awarded to:

Each university sets their own due dates and application specifics. For more information please contact the College or Department of each school or Robert Stewart at the CCIA, 530-752-9826 (rfstewart@ucdavis.edu).

New crop standards are now available for corn, hybrid corn, flax, rape, and hybrid rape. They are available to read or print on the CCIA web site.

The presence of a new race of Fusarium oxysporum f. sp. vasinfectum race 4 (FOV4) has been found in some of the cotton production areas in the San Joaquin Valley. Research indicates this organism is persistent in the soil and can be transmitted in seed produced on infected plants. The California cotton industry and the cotton seed industry has requested that certified seed produced in California not be infected with FOV4. In May 2007, the CCIA Board of Directors approved a change in the certification standards for cotton seed production to include field inspection for the presence of FOV4. Inspection for FOV4 must be done on young stands (preferably not more than 90 days after planting) necessitating increasing the number of field inspections from 1 to 2, and making timely submission of applications for certified seed production critical. The early inspections will be done by a combination of aerial, ground inspection, and laboratory verification of FOV4 on all suspect fields.

- Variety Approval A crop variety must be approved for certification by the CCIA Board of Directors before tags can be printed and distributed. At least one of the following favorable actions can admit a variety to the Board for approval:

- Plant Variety Protection The Plant Variety Protection Act (PVPA), enacted in December of 1970, and amended in 1994, provides legal intellectual property rights protection, to developers of new varieties of plants that are sexually reproduced (by seed) or are tuber-propagated. The PVPA is administered by the USDA. A Certificate of Protection is awarded to an owner of a variety after an examination shows that it is new, distinct from other varieties, and genetically uniform and stable through successive generations. The term of protection is 20 years for most crops and 25 years for trees, shrubs, and vines. The owner of a U.S. protected variety has exclusive rights to multiply and market the seed of that variety.

- Certification Technical Committee The next meeting of the Certification Technical Committee (CTC) is scheduled for April 24, 2008; “Application for Variety Certification” of new varieties to be reviewed by CTC are due in the CCIA office by April 11, 2008. Additional information and applications are available on the CCIA web site. The CTC is advisory to the CCIA regarding eligibility of varieties for certification. The committee is made up of members from the CCIA, Department of Plant Sciences, Plant Pathology Department, Foundation Seed Program, California Department of Food and Agriculture, and the United States Department of Agriculture. This committee will review varieties for distinctiveness and genetic stability according to the guidelines established by the Association of Official Seed Certifying Agencies. The CTC will meet three times a year during the months of January, April, and August to review pending varieties. Applications for new varieties to be reviewed by CTC are due by April 11, 2008.

Timothy Blank has been employed by CCIA since August of 2005. While born and raised in the suburban village of San Lorenzo, located on the east side of the San Francisco Bay, his earliest childhood dream was to become a farmer. Later, his interests shifted toward insects and their impact on agriculture. Throughout college, he worked on a campus farm as a professor’s assistant, performing most of the planting, irrigating, fertilizing and cultivating of a field containing ~1500 varieties of vegetable crops, which were being grown for student observation and study. He graduated from UC Davis in 2005 with a B.S. from the College of Agricultural & Environmental Sciences, majoring in entomology. What Timothy most enjoys about his work is spending time in the field inspecting crops of all types and also meeting with people involved in every aspect of agriculture, from plant breeders to seed producers. He truly believes in CCIA’s mission and views his employment not as a mere job, but as his vocation. Timothy and his wife Sue have been (happily) married for nearly three years, but have not yet been blessed with children. He met Sue at age 11, began courting her when he was 18, and married her at 21. They recently purchased their first house in Woodland. He has three older brothers, two of whom are Lutheran school teachers and one who is a farm manager and citrus grower. Timothy and Sue are active members of St. Stephen Lutheran Church, a member congregation of the Church of the Lutheran Confession. When not working, he enjoys hiking, camping, backpacking, fishing, reading, and since moving to the Central Valley, he has started duck hunting.