In the next few weeks, the CCIA will be launching a convenient new online Tag and Blend Request Program that seed conditioners can use to submit orders for certification tags and seed blending requests. The program will make the process of ordering tags and submitting blend requests much more expedient.  The system will also enable the CCIA to track tag inventories with greater efficiency. Due to the many complexities involved, development of the process required a Herculean programming effort, but it has definitely been worth the investment of time.  Look for the new program on our website on October 26, 2016. 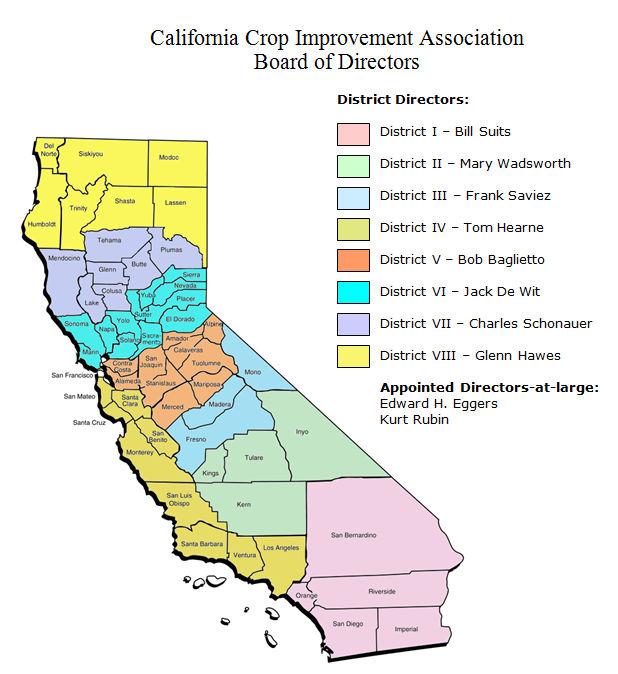 Terms will soon be expiring for four of the eight elected directors who currently are serving on the CCIA Board.  Click on the map to view a larger image of the districts within the state.

In November 2016, elections will be held for the following districts (incumbent directors are listed):

After the votes have been tallied, newly elected (or re-elected) directors will be seated at the CCIA Board meeting in February, 2017.

Two new members were welcomed to the CCIA Board of Directors at the September Board meeting.

Joe DiTomaso, Interim Chair of the Department of Plant Sciences, replaced Chris van Kessel (former Department Chair) who announced that he will be retiring from the University at the end of 2016.  Dr. van Kessel had served on the CCIA Board of Directors since 2003.

We are very grateful to Chris van Kessel and John Heaton for their many years of service and for the wisdom and guidance they have provided the California Crop Improvement Association.

Due in part to the prolonged drought in California in recent years, as well as a cyclical downturn in demand for certified seed of certain key crop species, the CCIA sustained substantial negative net revenues in 2014-15 and 2015-16.  Though the situation appears to be improving, current budget forecasts for 2016-17 indicate that we may incur a third year of negative net revenue.  To manage cash flow, we have been forced to make significant cash withdrawals from our reserve fund. Although management at the CCIA has made a concerted effort to cut costs, our reserve fund has been reduced to a level below the established minimum threshold.

The CCIA is entirely self-funded with fees collected for services rendered.  Several types of fees are collected by the CCIA as described below (the entire fee schedule may be viewed on the CCIA web site):

In order to help the CCIA better manage cash flows and gradually rebuild its financial reserves, the CCIA Board of Directors met on September 15, 2016 and voted to support a ten percent increase in seed certification fees only for all crops.  This increase will become effective on October 1, 2016.

In the coming years, if the CCIA Board of Directors deems that excess revenue has been collected, we will promptly issue refunds to seed conditioners as has been done in the past.

Orders Due Now for Foundation Seed Needed in 2017!

As many seed producers are already aware, the UC Davis Foundation Seed Program recently launched a new procedure for ordering foundation seed.  All foundation seed orders must now be made by submitting a binding Advanced Seed Purchase Agreement.  We have already received many of these agreements for seed needed for planting this fall.  Unfortunately, we have received very few of these agreements for foundation seed that will be needed for planting in the fall of 2017. See the Foundation Seed Program web page for more information.

Please remember that foundation seed needed for planting fields in the fall or winter of 2017 must be ordered now, a year in advance!  The FSP will no longer be growing new foundation seed acreage without first obtaining signed Advanced Seed Purchase Agreements from our customers.  This change has been implemented because excessive stockpiles of unsold foundation seed inventory have resulted in large financial losses for the program.

The cutoff dates for ordering foundation seed for delivery in fall 2017 are shown below. You will notice that the cutoff dates have already passed for many crop species.  The FSP will, however, be accepting orders until October 31, 2016 during this transition period.

Purchaser shall submit a signed Foundation Seed Advance Purchase Agreement to the University for all seed requests by the following cut-off dates:

New standards for certified sunflower seed were recently adopted by the Association of Official Seed Certifying Agencies and the CCIA.  The standards for certified sunflower seed previously required isolation from three plant species, Helianthus agrestis, Helianthus similes and Helianthus ludens. These three species were originally thought to be capable of crossing with Helianthus annuus (domestic sunflower), however, it has since been determined that this is not the case.  In fact, two of the species, H. similes and H. ludens have been reclassified as species within the genus Viguiera.  As such, our standards have been reworded as follows:

Fields must be isolated from flowering plants of other varieties, hybrids, strains, volunteer sunflowers, noncertified crops of the same variety, hybrid, or wild annual Helianthus species (other than H. agrestis) as follows:

In all seed production fields, the maximum number of off-type plants allowed shall not be greater than 1 in 5,000 plants.

New standards for certified wheat seed testing procedures were recently adopted by the Association of Official Seed Certifying Agencies and the CCIA.  The new standards require that “all wheat samples shall be visually assessed for kernels of contrasting color.”

This change was intended to take effect immediately. However, since many certification agencies and their clients are midway through the conditioning/marketing season, it was felt that such a change might be burdensome to implement without advanced notice.  We acknowledge that it will take time to notify the seed industry.  Seed testing labs will also need additional time to train staff and implement new testing protocols.  Likewise, developers/owners of wheat varieties will need additional time to review variety descriptions and make amendments for the allowance of variants as warranted.  In light of these concerns, the CCIA will delay implementation of this new testing requirement until October 1, 2017.

AOSCA and the CCIA encourage continued dialogue with the seed industry and the seed testing community to determine if further refinements are needed within this standard.

Several times each year, the California Crop Improvement Association conducts a Seed Sampler Certification Training Program under the oversight of the Association of American Seed Control Officials (AASCO). The objective of this Program is to ensure that all certified seed samplers use methods and equipment that are approved by the Association of Official Seed Analysts (AOSA). Seed sampler training helps achieve uniformity in sampling of certified seed that is produced and used within our state. More importantly, it results in more accurate and representative seed analysis results and bag tags that better reflect the quality of the seed being marketed. The CCIA requires that all seed samples sent to seed laboratories for certification purposes must be obtained by trained, certified samplers.

We are pleased to announce that we will hold two AASCO-CCIA Certified Seed Sampler Training Workshops this fall:

These workshops are intended for personnel from any county Ag Commissioner’s Office and for any employees of seed conditioners or warehouses that will be sampling certified seed.

Please share this announcement with others who may wish to attend. For details, please contact Alex Mkandawire at abmkandawire@ucdavis.edu or 916-284-6563.

At the behest of the CCIA Board of Directors, two additional academic scholarships were awarded by the CCIA to deserving college students at the close of the 2016 school year:

In May, Joshua Klockmann of Cal Poly Pomona received a $2,000 scholarship to support his continuing education. Josh is from Brawley, California where his family grows dates. He is a senior who is working on a double major in Plant Science and Agricultural Science.  Josh currently holds a 3.98 GPA.  He has held many leadership positions at Cal Poly Pomona, including President of the Los Rancheros Agronomy Club, President of the Ag Council, member of the Gamma Sigma Delta Honor Society of Agriculture and member of the Los Robles Horticultural Club. He has experience working at Cal Poly Pomona’s Greenhouse/Hydroponic Unit as well as the Cal Poly Agronomy Farm.  He plans to complete his Agricultural Teaching Credential and become an ag teacher in the Imperial Valley. 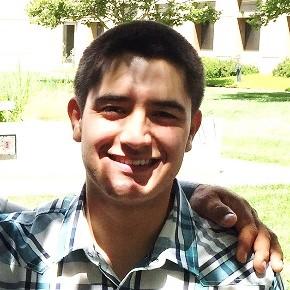 In June, Jorge Rodriguez of UC Davis was also awarded a $2,000 scholarship from the CCIA.  Jorge grew up in Hanford, California where he began working on his family’s farm at a very young age. The UCD Plant Sciences Advising Office described him as one of the most hardworking students they have ever known, commenting on his incredible drive and strong work ethic. He juggles multiple jobs while still maintaining a high GPA. He has developed a singular expertise in the use of manure for compost and is expected to achieve great success in the future.